My first year in the Athletic Training Program here at Emory has been a fun and unique experience. Before we had to report back to school in August I was nervous, I kinda knew what to expect but now I had to actually go in and do the work. So my confidence was kinda low going into the Fall semester but once I started doing the work in class and getting hands on experience in the Athletic Training Clinic I started to get more comfortable. So as a person my confidence has increased a lot and as an athletic training student and scholar I feel like this year has been my best when it comes academics. My time management is so much better, being in this program has forced me not to be lazy. I would have to say that highlight piece of my first year would have to be Upper and Lower Extremity class. Those two classes were a fun challenge especially learning about all the different injuries and anatomy of the body, and doing examination practicals for each area of the body was really helpful as well. As for the rest of my years here I am just really looking forward to learning more information and becoming the best Athletic Trainer I can be! 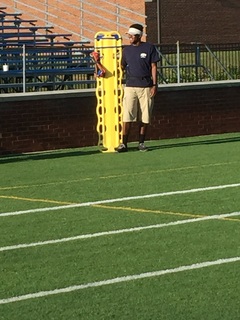